3D scanning is the process of analyzing a real-world object or environment to gather data about its shape and likely appearance (such as color).The collected data can be used to build digital 3D models.3D scanners can be based on a number of different technologies,each with its own limitations, advantages and costs.Many limitations on the kinds of objects that can be digitized still exist.For example,optics can have a lot of trouble dealing with dark,shiny,reflective or transparent objects.For example, industrial computed tomography,structured light 3D scanners,lidar and time-of-flight 3D scanners can be used to build digital 3D models without destructive testing.The collected 3D data can be used in various applications.These devices are widely used by the entertainment industry to create movies and video games,including virtual reality.Other common applications of this technology include augmented reality, motion capture,gesture recognition,robotic mapping,industrial design, orthotics and prosthetics,reverse engineering and prototyping,quality control/inspection and digitization of cultural artefacts. 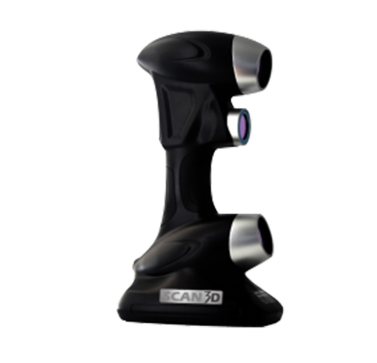 The purpose of a 3D scanner is usually to create 3D models.The 3D model consists of a polygonal mesh or point cloud of geometry samples on the surface of the object.These points can then be used to infer the shape of the object (a process called reconstruction).If color information is collected at each point,it is also possible to determine the color or texture of the object's surface.3D scanners share several characteristics with cameras.Like most cameras,they have a cone-shaped field of view, and like cameras,they can only collect information on unobstructed surfaces.A camera collects color information for surfaces within its field of view,while a 3D scanner collects distance information for surfaces within its field of view.The "picture" produced by the 3D scanner describes the distance of each point in the picture from the surface.This allows to identify the 3D position of each point in the picture.In some cases,a single scan will not produce a complete model of the subject.Taking multiple scans from different directions is often helpful in obtaining information about various aspects of an object.These scans must be brought into a common reference system, a process often called alignment or registration,and then merged to create a complete 3D model.The entire process from a single range map to an entire model is often referred to as the 3D scanning pipeline.

There are various techniques that can be used to obtain the shape of 3D objects digitally.These techniques are applicable to most or all sensor types, including optical, acoustic, laser scanning,radar, thermal, and seismic.A well-established classification divides them into two types:contact and non-contact. Contactless solutions can be further divided into two broad categories,active and passive.Each of these categories has multiple techniques.

Contact 3D scanners work by physically probing (touching) the part and recording the position of the sensor as the probe moves around the part.

There are two main types of contact 3D scanners:

Active scanners emit some kind of radiation or light and detect the radiation it reflects or passes through the object to detect the object or the environment. Possible emission types include light, ultrasound or X-rays.

A time-of-flight 3D laser scanner is an active scanner that uses laser light to detect objects.At the heart of this scanner is a time-of-flight laser rangefinder. Laser range finders determine the distance to a surface by counting the round-trip time of a pulse of light.A laser is used to emit a pulse of light, and the amount of time before the reflected light is seen by a detector is measured.Since the speed of light is known, the round trip time determines the distance the light travels,which is twice the distance between the scanner and the surface.If is the round-trip time, then the distance is equal to.The accuracy of a time-of-flight 3D laser scanner depends on how accurately we measure time: 3.3 picoseconds (approximately) is the time it takes light to travel 1 mm.A laser rangefinder only detects the distance to a point in its viewing direction.Therefore, the scanner scans different points by changing the viewing direction of the rangefinder, scanning the entire field of view of one point at a time.The viewing direction of the laser rangefinder can be changed by rotating the rangefinder itself or by using a rotating mirror system.The latter method is usually used because the mirror is lighter and therefore can be rotated more quickly and accurately.A typical time-of-flight 3D laser scanner can measure distances at 10,000-100,000 points per second.Time-of-flight devices are also available in 2D configurations. This is called a time-of-flight camera.

Triangulation-based 3D laser scanners are also active scanners that use laser light to probe the environment.With time-of-flight 3D laser scanners, a triangulation laser shines laser light on an object and uses a camera to find the location of the laser spot.Depending on how far the laser hits the surface, the laser dot appears at different positions in the camera's field of view.This technique is called triangulation because the laser point,camera and laser emitter form a triangle.The length of one side of the triangle, the distance between the camera and the laser emitter is known.The angle of the laser emission angle is also known.The angle of the camera angle can be determined by looking at the position of the laser point in the camera's field of view.These three pieces of information completely determine the shape and size of the triangle and give the location of the corners of the triangle's laser spot.In most cases, laser stripes rather than individual laser spots are swept across the object to speed up the acquisition process.

3D Handheld Laser Scanner
we'er built huge sales network in central Asia and Russia, treat every customer sincerely, with tenacity and stick to service every customer, layout with a diversification strategy to support our confidence in the central Asia market constancy.